In a 1970 Mazda RX2 that cost only $10,000, the 2017 Australian Rally Champion triumphed over a class field during a bushfire, and rain-shorted, Alpine Rally Of East Gippsland.

Nathan Quinn said “I built the car, pretty-well from the ground-up ten years ago. It’s got much the same engine I had when I used to deliver pizzas, telling my old man I wanted to be a rally driver!”

His navigator, fellow New-South Welshman, Ray Winwood-Smith has resumed rallying after a twenty-eight year break. It was his first Alpine Rally.

Third was Carl Stewart and Matty James in their Datsun 1600. Previous winner of the Rookie’s Award, this was Stewart’s seventh attempt, and best place in The Alpine.

International voice of the World Rally Championship, Colin Clark, told a packed crowd that The Alpine is a unique event on the world stage. “Every time you come to Australia you realise how strong the rally community is.”

“You’ve got to give it to the organisers. They have worked with the two most challenging extremes you can imagine, bushfires on one hand, terrible rain and slippery conditions on the other — and we’ve still had a rally!”

“You’ve got this event that, next time, will be a hundred years old. That’s something to be celebrate, surely.”

The Event Director, Owen Polanski, thanked local officials from all agencies, and from the Historic Rally Association who made the rally possible.

“They all willingly go out at all sorts of weird hours, in all sorts of terrible weather, and they do all sorts of fantastic work for us; sometimes for many, many hours out in the bush.”

“I cannot thank them enough, for without them, nothing happens.”

The Alpine Rally has an economic impact of about three million dollars in the region. The next running, of the fourth oldest motorsport event in the world, and oldest in Australia, will be in 2021. 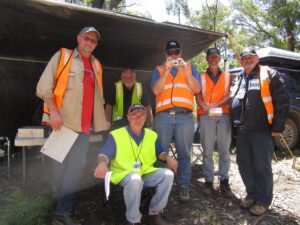 Rallying needs volunteer officials – and lots of them! Never has this been more evident than in the 2022 Lock and Load Transport Alpine Rally

THE JOB’S NOT FINISHED UNTIL THE PAPERWORK’S DONE

A good reason why they invented dunny paper! And that’s exactly what may happen to your 2022 Lock and Load Transport Alpine Rally of East 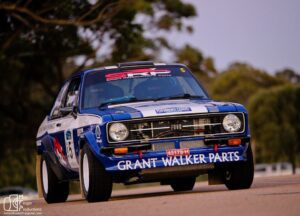