A short history of the Alpine Rally

Australia’s Alpine Rally is one of the oldest surviving motor sport events in the world. Only the French Grand Prix, the Monte Carlo Rally the Indianapolis 500 and the Pikes Peak Hill Climb have been running for longer.

The Alpine Rally has outlived every other classic rally in Australia – the Redex Trials, the BP Rally, the Southern Cross Rally and the Castrol Rally. Why, you may ask.

The answer is the unique challenge the event presents to competitors. Long sections, rugged mountain roads, dust, heat and fatigue all combine to test the mettle and character of crews and cars to the full.

The first Alpine 1000 mile Trial was run by the RACV in 1921, attracted 28 starters and lasted seven days. It travelled via Bairnsdale, Omeo and Mount Hotham, and was won by Archie Turner in an Itala.

In the early days the events were more touring in nature, with sub events such as acceleration tests, hill climbs and fuel economy tests used to determine the winner. Points were lost for vehicle defects – a broken connecting rod earned a penalty of 100 points!

In 1926 the Alpine Rally was taken over by the Victorian Light Car Club, later to become the Light Car Club of Australia, and became more competitive in nature. Omeo and Mount Hotham remained cornerstones of the Alpine course.

The crossing of the saddle just below Mount Hotham was a nerve wracking experience, the road being narrow and slippery with sheer drops off each side.

After the hiatus of World War 2 the event changed in character, with speed and navigation the important factors. By the 1950s the Alpine was more compact, being run over a weekend, but still covering in excess of a thousand miles.

From the 1970s under the directorship of Bruce Ford and Tony Theiler, the event became a straightforward test of driver speed and car reliability, with navigation made much simpler. It was the forerunner of today’s special stage rallies.

Over its history the Alpine Rally has attracted strong sponsors, including Philip Morris, Kleber tyres, Enkafill cleaning cloths, Repco, BP Australia and even the City of Bright, which profited greatly from the event’s presence each November.

Since the 1950s the star Alpine drivers have been Harry Firth, George Reynolds, Lou Molina, Don Opie, Frank Kilfoyle, Tony Roberts, and more recently Greg Carr and Geoff Portman. Carr tops the winner’s list of the LCCA Alpine Rallies with 6 wins, followed by Frank Kilfoyle and Harry Firth with 5 each, and Tony Roberts and Geoff Portman 3 each. Portman has since taken a further two wins in the historic Alpine Rallies organized by the Historic Rally Association.

The Alpine rally ceased to be a heat of the Australian rally championship in 1992, following the bankruptcy of the Light Car Club of Australia. Fortunately the tradition has been preserved by the Historic Rally Association which decided to run the event every two years for classic rally cars, excluding four wheel drive.

Due to difficulties obtaining the use of forestry roads in the traditional Alpine areas in North Eastern Victoria the event has transferred to Lakes Entrance, where excellent facilities and eminently suitable Alpine roads are more readily available.

The Alpine Rally continues to attract fields of around 100 cars, and is easily the most popular rally in Australia. Crews come from every state to compete, and take up the unique Alpine challenge. For most, the aim is not to win, but to finish – an achievement in itself.

Note: A full history of the Alpine Rally is featured in Bob Watson’s book on the history of the Light Car Club, Phillip Island to Fangio, with contributions from the most successful Alpine winners, Harry Firth, Frank Kilfoyle and Greg Carr.

Go to www.bobwatsonrally.com.au for more info. 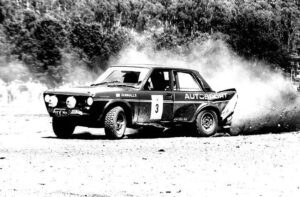 Page banner. Geoff Portman and Ross Runnalls in the 1980 Alpine, on the Bright Speedway. We’ve recently learned that rally enthusiast John Wilson took this pic way back in 1980. Great shot John – thanks for allowing use it.