This article by Carl Stewart appeared in the HRA Magazine Feb 2020. We have reproduced it here as an example of how the Alpine Rally gets into the DNA of families and becomes more than just another rally. It’s another element of ‘the vibe’ that makes the Alpine so special.

The Alpine is an event that can ‘Giveth and Taketh’. It will challenge, inspire, evoke varying emotions, good and bad, be hot with flies or wet with flooding rain, mozzies and all combinations in between. 2019 had all of that for those involved.

Excluding my first Alpine in 2007, every following Alpine has seen some unfortunate failure, driver error or preparation error on my behalf. Post-2017 Alpine discussions were had and the main outcome was no changes to be made to the Datto for the 2019 Alpine, instead, just learn the beast we had created. A deadline was set for two weeks out that no mechanical work remained, only basic cosmetic work. This was achieved and the car was tested and felt great. 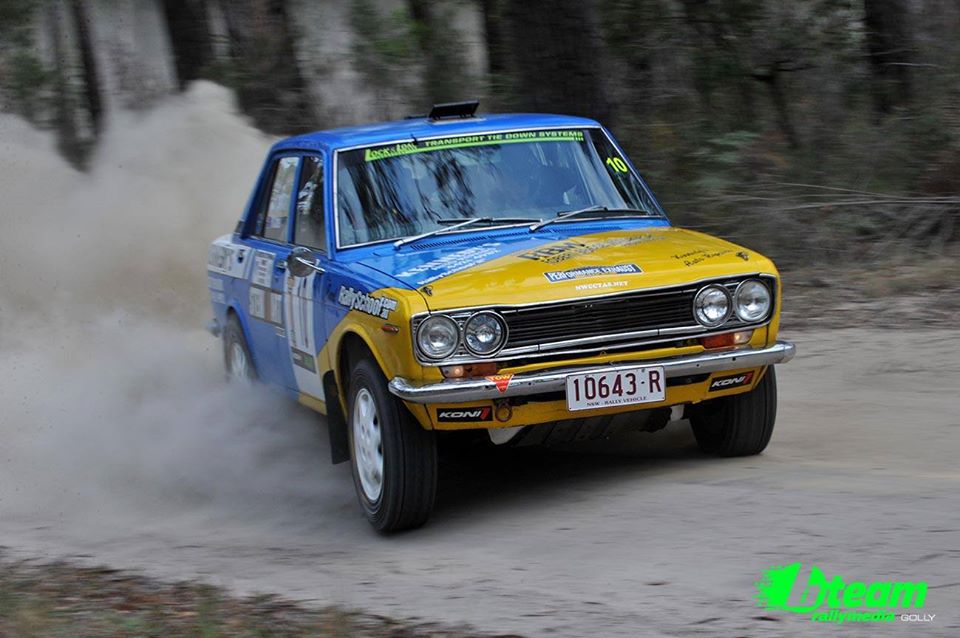 Coming to the start of the event I had no expectations. I did however feel very confident in the car and team as we had as several good results in recent events, and our supportive crew are just the best. The only Achilles Heel was the cooling system, as a niggling over-heating problem had been bugging us for some time.

The first stage was like any rally, the first kilometre was settling back into the Datto’s ways and driving it to my initial comfortable limit. The stage generally felt good and we finished 5th.  The unfortunate long wait at the speedway was a great catch up with other teams, but not great for staying in the ‘rally groove’ or for the resulting sun burn…

Starting the stage felt like we were back at the first stage start. I was relatively nervous as there was a sizable crowd eagerly awaiting an impressive spectacle, or unfortunate failure. We entered the speedway arena in the air, as did many, but the first right hander was the start of the unimpressive spectacle we provided due to the fuel tank. If the speedway was reversed then the fuel pick-up was perfectly positioned for every last drop of fuel, but sadly no. We limped our way around coughing and spluttering to the finish. Maybe next Alpine I will get that right!

The following day we awoke to rain. Australia badly needed rain and still does, considering the devastating fires and drought, but for us drivers it just wasn’t needed ‘that’ day. On the transport to the third stage, without warning, the driver’s wiper parted ways. Matt and I searched 200m of road for about 6 minutes only to find it after getting back in with belts back on… The stage was super slippery but still quite controllable.

The following stage we encountered severe cabin fogging but my now muddy and soggy rag did very little to help. Once again, another slippery stage, but this time we had the joy of watching the same wiper arm depart for an overnight stay on the side of the road… For me, visibility was now at an all-time low. Not for Matt, he had a great view.

Entering the service, frustrations with moisture in and out were dampening our ‘happy’, well, my happy wasn’t all that good. Thankfully, I have a great team that take the Mickey out of me, and each other, and are always laughing and smiling. Leaving the service park we had fixed the wiper with Matt now having a poor view and me with the improved one, the fogging was resolved and all my ‘happy’ was back… winning!

The following two stages proved to be very challenging with extremely slippery and at times unpredictable surfaces. These saw the demise of both Jack Monkhouse and Andrew Travis, which was sobering for our speed management. Completing these stages, I was repeatedly encountering my over-heating issue from lack of water in the coolant tank, yes this was concerning.

Arriving at the start of the 56km stage I was mentally prepared for this to be the last stage for the car, as the distance would beat the coolant tank capacity. Prior to entering the control, I opened the tank over a slow three-minute process of spluttering hot air, green foam and hot water bursting out, to eventually refill it with almost all our remaining water. I honestly wasn’t confident we would make the 56km distance.

Anyway, off we went and wow, what a fun stage! This stage was the highlight of the whole event; tight and twisty then high-speed with flowing, linking corners through varying thick forest to tall timber and open areas. We did have an embarrassing gear-crunching session at the spectator point and a little further on, an indiscretion with an embankment which, much to our relief, only damaged the rear cosmetically. The whole distance I was waiting for the temp to rise but to my surprise, it made it to the end without issue then all the way to service… Winning! 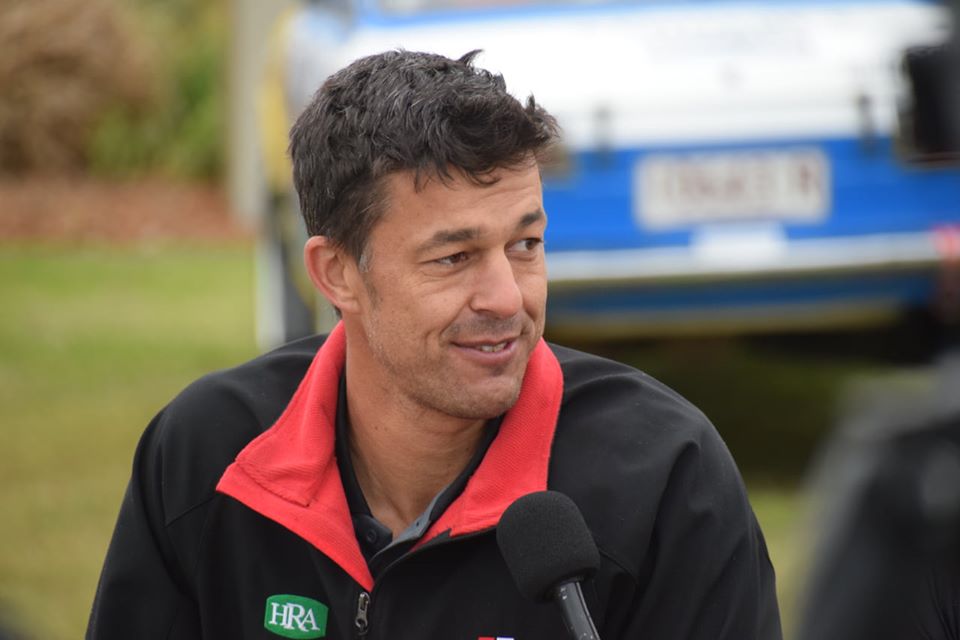 The service at Cann River would have to be one of the most memorable. While engrossed in the radiator issue I had a tap on the shoulder by Black Magic Media, asking us to do an interview with Colin Clark as we were now apparently running 4th. Wow, my mind was blown! This media megastar and crew wanted to talk to our team.  This was the first time I had ever met him and what a personality! So vibrant and descriptive. It was a cool moment talking about our mishaps and endeavours.

The next stage out was a favourite. The road was mostly familiar, fast and flowing and the car felt great. With a little bit of prior knowledge, some hopeful corner preparation and a whole heap of ‘cross my fingers and hope it works’, we took the ‘Super Cut’ at the spectator point/ Thankfully we pulled it off and it seriously felt cool. It was one of those moments of complete satisfaction where you are mentally fist pumping while trying not to crash on the next corner.

Further on we passed the stricken BMW of Ben Barker and then a kilometre or so later, the car for what seemed like no reason, spun on a nothing corner? (I think I know why) During the transport without warning the temperature spiked over 100° so I quickly shut it down. The radiator tank was completely empty and took all remaining water we had in the car, which was barely enough. The temp slowly returned to normal levels and off we went.

What was to be the final stage was by far the most challenging. The car was barely controllable resulting in us running straight off the road into a spoon drain in the first kilometre. Thankfully, we missed several car destroying obstacles but dropped significant time trying to get back on the road then keep it on the remaining 15 or so km’s.

At the finish we were told of the cancelation of the last two stages and it wasn’t until about halfway back we realised we may have secured a podium finish, which I will say has been a lifelong dream.

A quick stop back at the Orbost service with a very excited service/support crew then it was home to the finish. This moment in time was one of complete fear mixed with such a high level of pride and excitement. Looking through a very obscured mirror with fogged windows, I could see all our service crew and our spectators following. This was such a proud moment, but as I said, my level of fear that the potential of the car to say ‘no more’ was very high! Every funny noise, bump, rattle had me on edge and I almost had REM between the water temp gauge, road, oil pressure gauge, road, temp, oil, road and so on and so on. I’m sure I must have looked like I had consumed 20 cups of coffee…

Finally handing in the road card at Lakes Entrance was one of the biggest reliefs of my life to date, much like being the last person in the class to hand in that final exam.

We were greeted back at the accommodation by the warmest and most excited crews around, it was just the best. A quick clean then down to the rotunda.

Looking at my little Datto parked in the top three was one of the proudest moments of my life. After 20-odd years the car had finally made it, but more so, I was proud for all the team. Everyone was on top of the world and this was their moment as much as it was ours. It was a reflection of the sacrifices and contributions we had all made and I’m so grateful.

Our day was sadly taken down several notches later that afternoon, when my son was informed that his best mate had lost his life in an unfortunate sightseeing adventure. This was definitely not a nice moment in time.

Alpine for me creates so many memories, connects with many old and new friends, while taking you on a rollercoaster of emotions. This Alpine, even in the shortened format, did all of that and secured my reasoning for spending countless hours of preparation with blood, sweat and the odd tantrum. Will we be back….? Without a doubt!

I have so many to thank like Owen and all his team from the HRA, and all of our team. ‘Thank you to all who make it happen’. 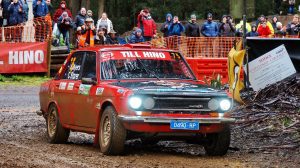 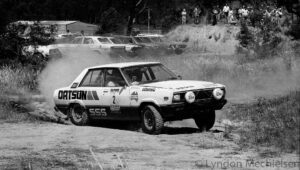 The Commemorative version of our Lock & Load Alpine Rally of East Gippsland poster is now available for download. Thanks go to Lyndon Mechielsen for 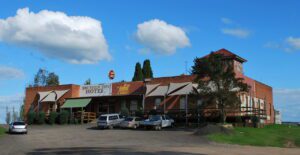